Trends in the Use of Election Day Voter Registration

Twenty-one states and the District of Columbia have adopted election day voter registration (EDR), allowing qualified unregistered individuals to register to vote and cast a ballot at the polls on election day or during early voting (1). Two other states (Alaska and Rhode Island) allow EDR, but only to vote for President and Vice President (2). This report looks broadly at how EDR use has varied across election years and between states over the past two decades. Has EDR use been more common in certain states or in certain elections, and if so, what appears to drive the differences? Using data on elections since 2004 to estimate the share of the electorate using EDR, we observe several trends:

Using data from the U.S. Election Assistance Commission and the U.S. Elections Project, we can analyze trends in EDR over the past two decades and generally observe how the use of EDR differs across elections and states.

The U.S. Election Assistance Commission (EAC) provides data on the use of EDR for the past nine federal elections, reporting the total number of individuals using the EDR process in each state (3). We pair these totals with turnout data from the U.S. Elections Project (4). By dividing the total number of individuals using EDR by the total number of voters, we can estimate the share of the electorate using EDR. This analysis does not include states that allow registration at the polls during some or all of the early voting period, but not on election day. The full data set is available here.

We primarily focus on states that have had EDR in place for five or more election cycles in order to analyze a representative sample of elections in each state. This narrows the analysis to eight states: Iowa, Idaho, Maine, Minnesota, Montana, New Hampshire, Wisconsin, and Wyoming. Idaho, Maine, Minnesota, and New Hampshire, Wisconsin, and Wyoming (5) have all had EDR since before 2004, the first election with available EAC data. Montana adopted EDR in 2005 (and repealed it in 2021, only allowing registration during early voting and not on election day). Iowa adopted EDR in 2007 (6). 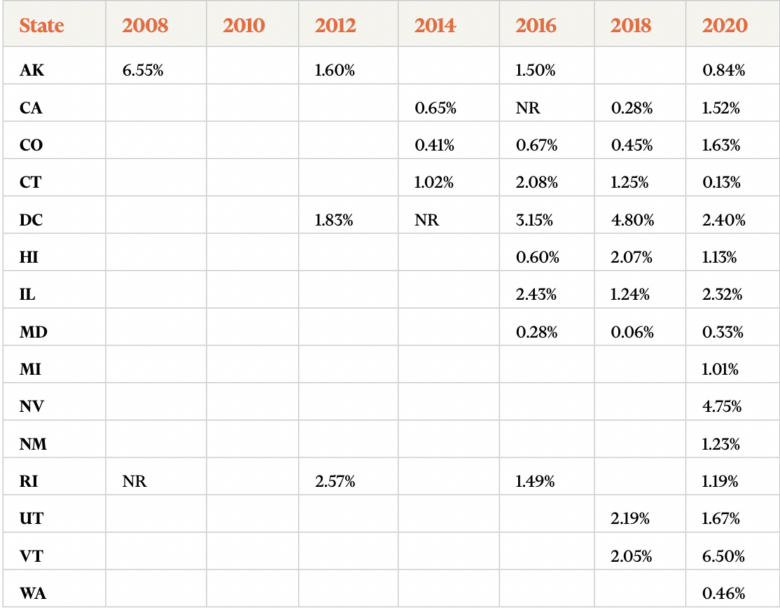 Observations
Using this data, we observe several trends in EDR usage across states and elections over the past two decades.

Second, EDR use is higher in presidential elections than midterms. The following table compares the average EDR vote share in presidential and midterm elections for the eight states that have had EDR since 2008. 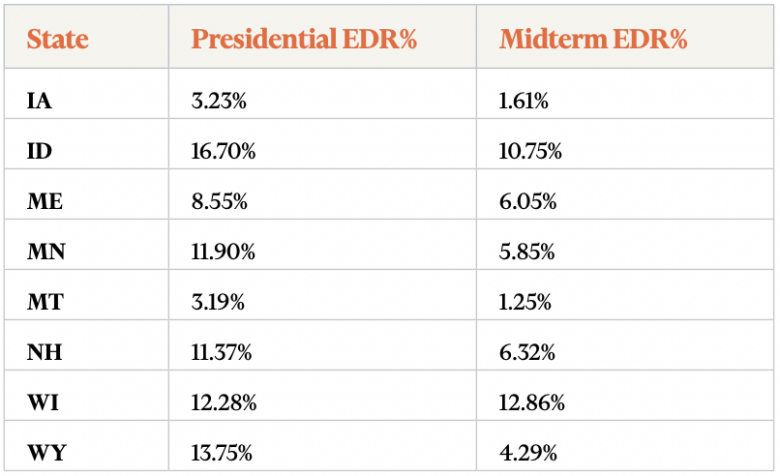 Third, the data also indicates that EDR use does not surge in the first election in which the policy is in place. Election administrators and legislators in states considering EDR might worry that EDR will create significant burdens for the first election with the policy, presumably because a significant pool of unregistered voters will appear at the polls to use EDR, overwhelming poll workers unfamiliar with the policy. However, the data does not support this concern.

Predictably, in states where there are fewer options for pre-election day registration and voters can be purged more easily, EDR plays a greater role. Voters who might otherwise have registered at the DMV or who were erroneously purged must utilize EDR in order to vote. The following table shows the average EDR vote share in the eight states that have had the policy in place since 2008. The NVRA-exempt states (in bold) dominate the list, taking the top five spots. 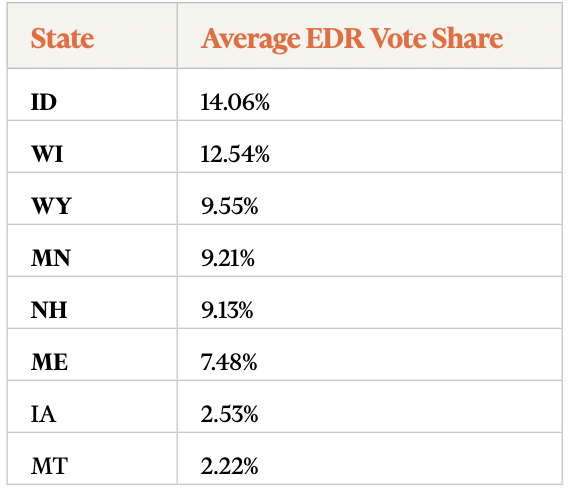 Consider again the table showing EDR vote shares over time, with the years in which each state had online voter registration in place bolded (11).

In the states that have adopted online registration, the availability of an additional pre-election day registration option appears to have reduced the share of EDR voters. The most obvious drop has occurred in Minnesota, where EDR use has sharply declined since 2014. In addition, slight drops also appear to have occurred in Iowa, Idaho and Wisconsin following adoption of online registration. This makes sense; when individuals can easily register to vote online before election day, fewer people will need to register to vote at the polls.

Other policies may also reduce the load on EDR. The EDR vote share in states that have adopted the policy more recently is fairly low. No post-2012 jurisdiction has an average EDR vote share above 5%, and most have an average EDR vote share under 3%. Notably, all of these states have adopted OVR, and all of them have also implemented automatic voter registration or a similarly streamlined system, where eligible individuals at the DMV must affirmatively decline a registration option to avoid voter registration (12). Although there are fewer elections to analyze, this streamlining of DMV registration may similarly reduce the load on EDR, by registering more individuals well in advance of election day.

(1) 1 National Conference of State Legislatures, Same Day Voter Registration, https://www.ncsl.org/research/elections-and-campaigns/sameday-registration.aspx (hereinafter “NCSL SDR”). The total of 21 states includes Virginia, where EDR was enacted in 2020 and takes effect in October of 2022, and Delaware, where EDR was enacted in July 2022, and will be in place for elections this year. A handful of other states do not have EDR, but have some form of same day voter registration (SDR), where individuals can register to vote at the polls during all or part of the early voting period. This report focuses on states with EDR, as opposed to the broader category of states with SDR.
(2) Id.

(7) Alaska and Rhode Island did not report EDR totals for 2004 to the EAC. Therefore, 2004 is not included in this table.